Whew a lot has been going down in the past month.  Griller Z’s latest print test was just sent to the printing company, and a fresh copy with the new box art should be arriving in a few weeks.  The final rules are still being flushed out, but it feels like it’s getting really close to production ready great.  That of course will be left up to whoever gets the first review copies (yikes!).

I wanted to take a moment to discuss some of the challenges I’ve learned over the course of a year of Griller Z development (wow it really has been that long).  One of the most interesting aspects about designing a board game has been the constant state of flux everything is in.  From the beginning until the end of development (and I’m not even done yet) really anything can be cut or added.  Perhaps this is because I’ve been doing most of the heavy lifting alone (Art & Design), but I think it’s important to be adaptable.

Griller Z is still version 1.0, but honestly that’s 3 complete overhauls with new art (to some degree) in each release.  It’s been a real labor of love and sheer will power to get it this far.  It feels really funny/terrible to be so completely certain that you have a winner to then have players take and break your hard work in seconds.  Complicated is only good if it’s simple?  What does that even mean, I’m not sure but I’ll tell you that Griller Z biggest lesson learned was that even the most amazing system in the world is probably too complicated.  People play games for fun!  You’ve got to make your players use their brains, but make it simple enough to be fun first.

Apologies for not continuing to post news about Griller Z, product reviews or anything new for a few days.  Getting Griller Z to print was a huge priority, and managing some of the other Flux 6 Studios initiatives always suffers when I’m pulled into Griller.  I sure hope it’s a year well worth my time.

Changes are inevitable, but Griller is getting close.  The core game system is finally ready, and we’re just tweeking and polishing now.  In the coming weeks a comprehensive video review of how to play Griller Z will be hitting the webz.  For now here’s a little taste of the latest card action!

First up are a few character cards!  Every character card is 100% unique with stylized art of the character on both the front and back of the card.  Every character has a passive pool of 4 skill points that dictate how they start the game.  These points can be allocated in BURN or ROT, SKILL(et) & MUNCH  Humans typically cook with BURN and Zombies generally cook with ROT.  We don’t discriminate however, go ahead with your bad Zombie food human Grill Master self! 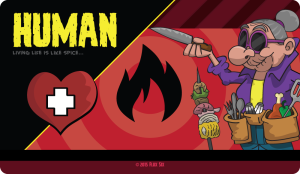 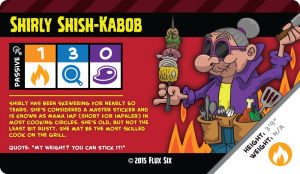 First up is Shirly Shish-Kabob.  She means business, and is one of the most skilled characters in all of Griller Z.  SKILL(et) does a lot of different cool things we’ll talk about soon.  As a tease, consider her one of the better characters for sabotaging others, and cooking up orders with precision. 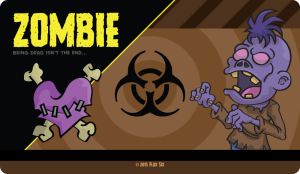 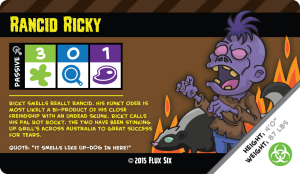 Ricky is a brute of a cook.  With 3 passive ROT right out of the gate, this boy is going to stink up the grill very quickly.  Look for him to infect a lot of food very fast.  With no passive SKILL(et) to protect him, he may be an easy target for sabotage.

So short, but hopefully sweet!  That’s just the way Ricky likes his rotten hotdogs.  We wouldn’t want to spoil (pun intended) too much just yet, but more will be trickling out in the coming days.

Well 2015 is over, but Griller Z is getting better and better. Hope to have a proper review copy hitting the streets in the next few weeks. We’re in the process of building another version of Griller Z in Table Top Simulator for further internal testing. Here’s an in progress sneak peak! 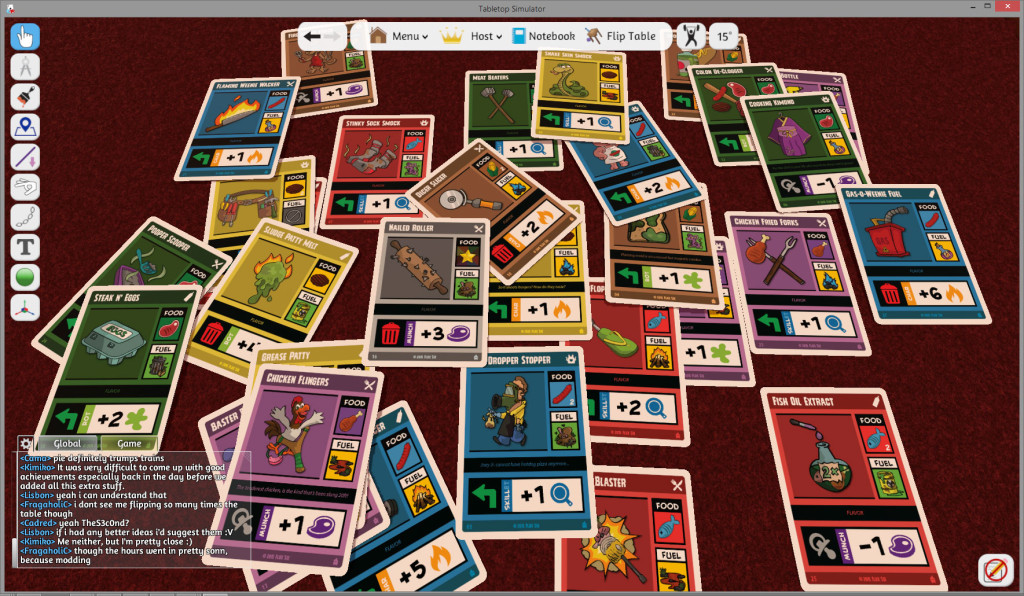 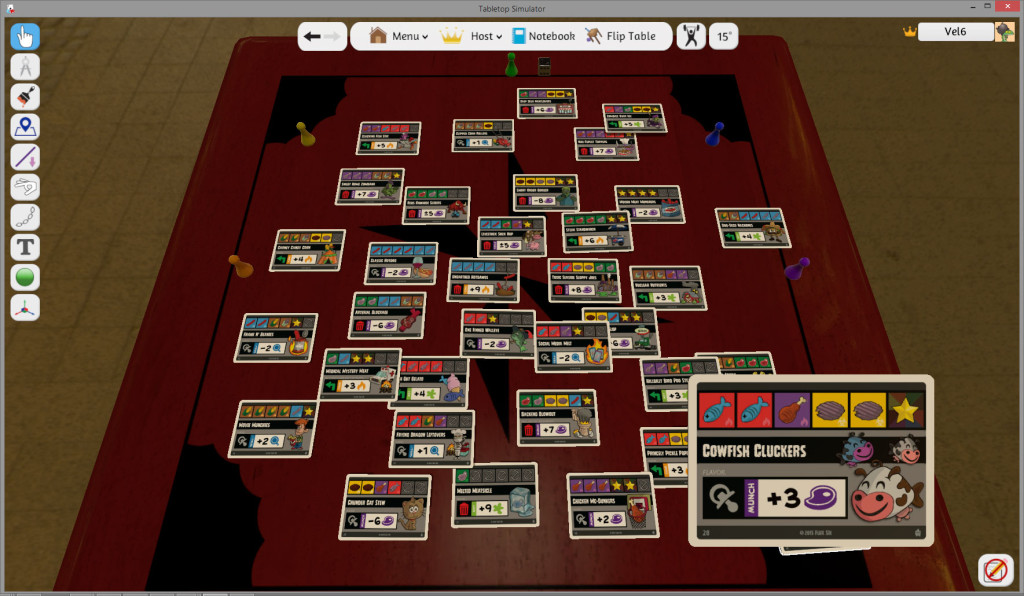 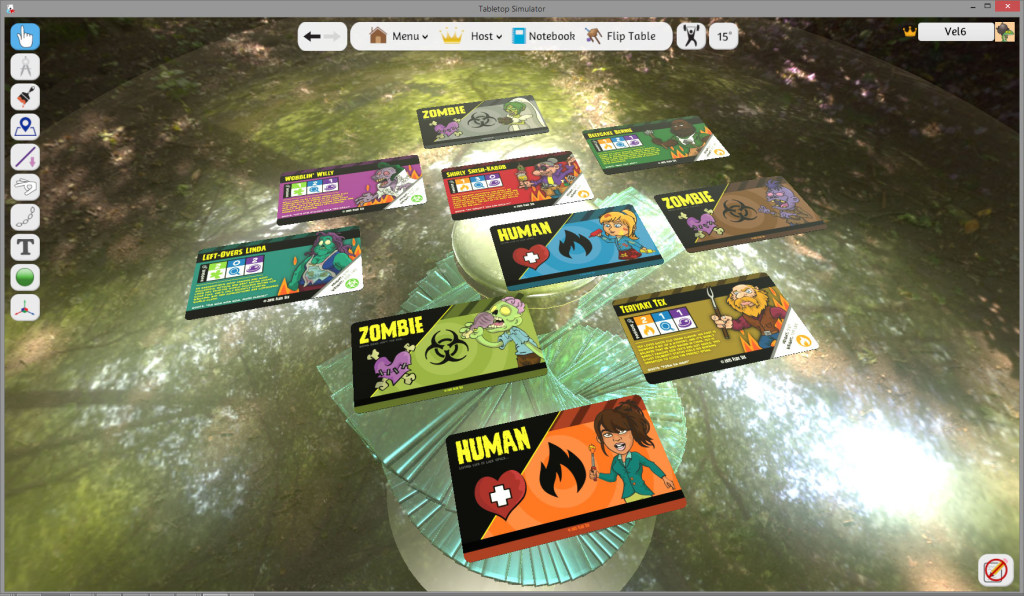 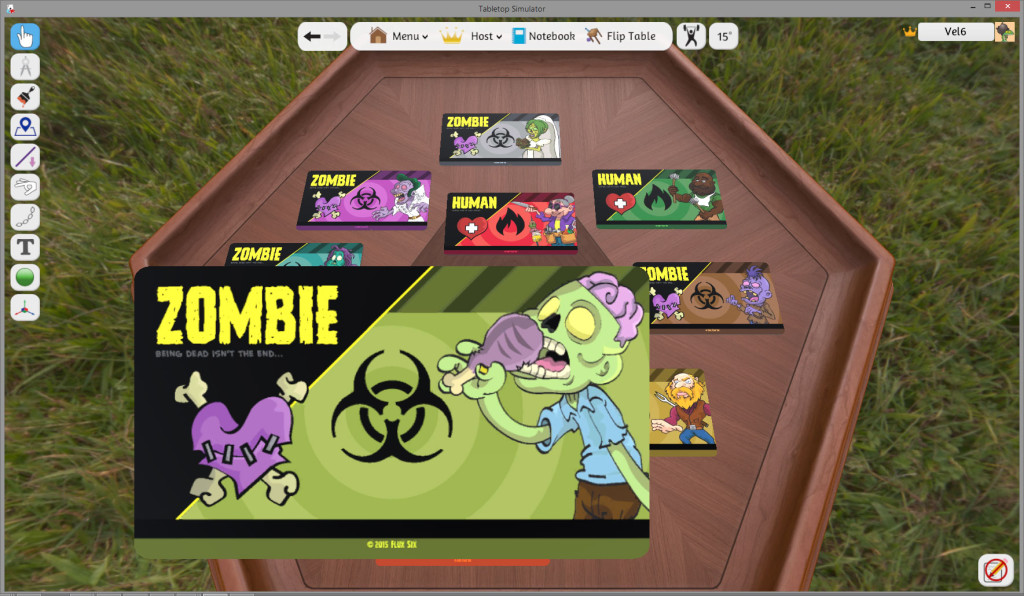 The latest build of Griller Z just arrived.  It’s time to get deep into some play test sessions.  Here’s some quick cell phone snaps of the latest arts. 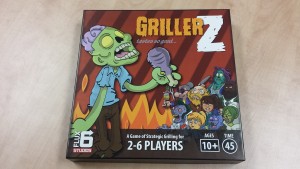 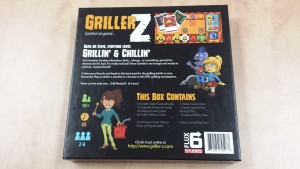 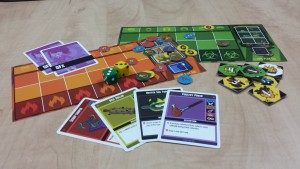 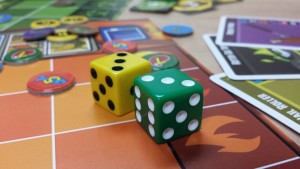 The latest hard copy printed build of Griller Z is on its way!  It ought to be in our hands within a few weeks.  Pictures and more info coming soon…

Griller Z has been modded into Table Top Simulator (TTS).  Testing and working out the bugs ought to be a breeze with TTS helping.  Look for a full featured beta mod coming soon to the Steam Gaming ecosystem. In the meantime, here’s a few screens of the dev tests. 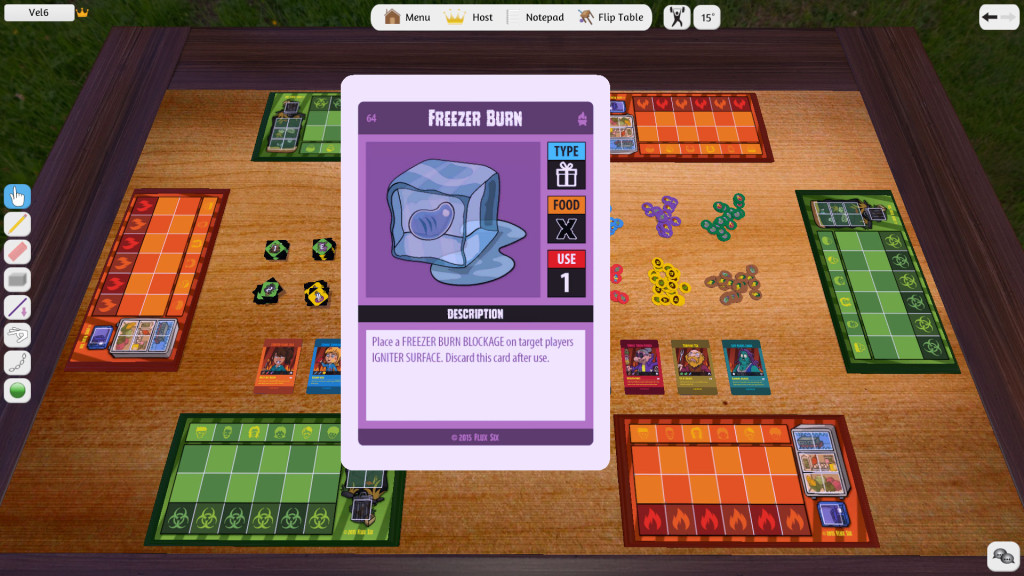 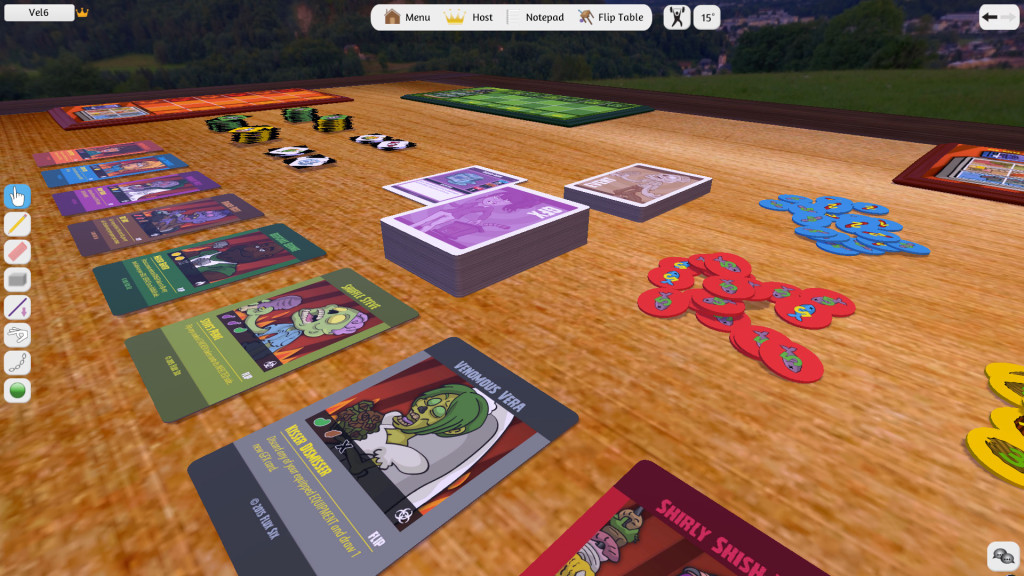 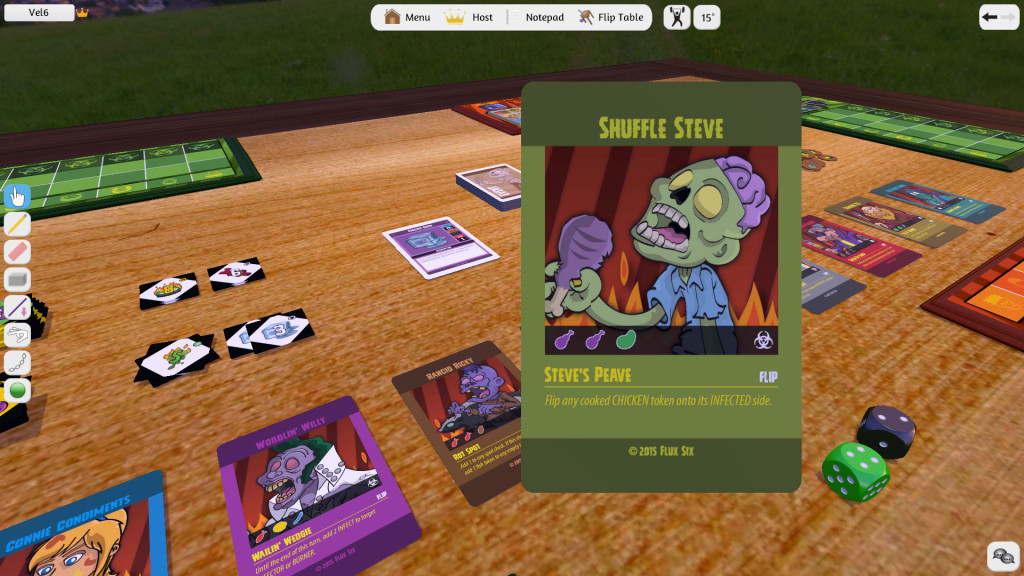 Griller Z has a new card on its hands.  Welcome the GFX (Griller Effects) card! It combines the best ideas from the old shop cards and Hazard cards into 1 neat and tidy package. There’s a total of 68 unique GFX cards in Griller Z! 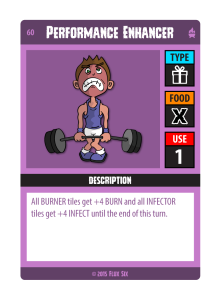 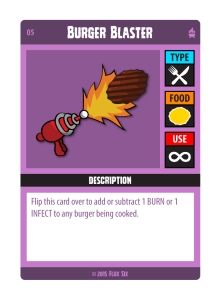 Griller Z had an intensive play test last Friday night (6/12/15). Many important features and ideas were put through their paces.  Parts of the game worked flawlessly, and made the cut, but there’s still a lot of fat to trim (pun intended), and work to do.

Spoil Checks – spoil checks may be the most functional component of the original rules. The difference between the Human’s and Zombie storage architecture relies heavily on this concept, and it’s great that it feels significant.

Shop Cards – shop cards worked very much as intended. There was some fear that giving players to little, or to much control over the cards would break the game quickly. Players seemed to easily get part or all of the food they needed, and EVENTS (even hard ones) were completed.

Event Cards – event cards felt either easy, or way to hard to complete. This was amplified because the player event draw was significantly lopsided in favor of Zombies, and most players chose Human characters. A new system is in the works to fix some of these glaring issues.

Burners – The rules for turning on burners did not convey to players well. Resource management, and order of operations needs to be drastically tightened. Scope creep is a likely culprit, and simplifying how Burners operate is the most logical fix. The GAMEBOARD/grill is getting a much needed overhaul.

Rule Book – Oh the poor rule book.  Moving and shifting rules so that they flow naturally and function is tough stuff. Scope creep again is a likely culprit for the difficulty players had grasping certain concepts. The rules were read by each player prior to testing the game, with no advice or direction was given (with the exception of suggestions for where to find specific rules in the book).  By in large players were able to play the game without help from Frank (the designer).  Simplifying the rules and rule book is at the top of the stack of things to accomplish.

The first internal Alpha was by in large a huge success. Super important problems were highlighted, and fun was had by all. When the ball got rolling, players were rapidly completing events.  There’s still a lot to do, but for a first run, we couldn’t be happier with the results. 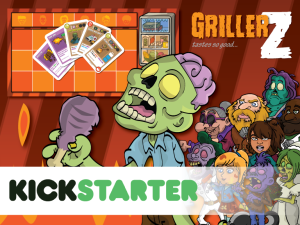 We’re working on a Kickstarter campaign for Griller Z (the board game). Check out the preview page at: